John Tavener, a British composer known for his meditative, sometimes passionate sacred works and colorfully scored orchestral pieces — including the popular cello concerto “The Protecting Veil,” and the haunting “Song for Athene,” which was performed at the funeral of Diana, Princess of Wales — died on Tuesday, 12 November 2013,  at his home in Child Okeford, in southern England. He was 69. 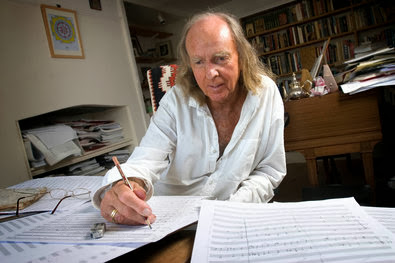 The British composer John Tavener in 2007 at his home in Dorset, in southern England.
Mr. Tavener, a composer informed by Orthodox Christianity, was heard throughout the world in his elegy, performed at the funeral of Diana, Princess of Wales...NYTimes Obit | Home Page

Sir John Kenneth Tavener (28 January 1944 – 12 November 2013) was a British composer, known for his extensive output of religious works, including The Whale, "The Protecting Veil" and "Song for Athene". He began as a prodigy; in 1968, at the age of 24, he was described by The Guardian as "the musical discovery of the year", while The Times said he was "among the very best creative talents of his generation." During his career he became one of the best known and popular composers of his generation. Tavener was knighted in 2000 for his services to music and won an Ivor Novello Award...Wikipedia
Email ThisBlogThis!Share to TwitterShare to FacebookShare to Pinterest
Newer Post Older Post Home