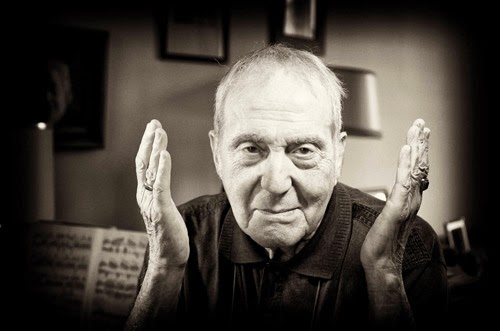 
Aldo Ciccolini was born in Naples. His father, who bore the title of Marquis of Macerara, worked as a typographer. He took his first lessons with Maria Vigliarolo d'Ovidio, and entered Naples Conservatory in 1934 at the age of 9, by special permission of the director, Francesco Cilea. There he studied piano with Paolo Denza, a pupil of Ferruccio Busoni, and harmony and counterpoint with Achille Longo.

He began his performing career playing at the Teatro San Carlo at the age of 16. However, by 1946 he was reduced to playing in bars to support his family. In 1949, he won, ex-aequo (tied) with Ventsislav Yankov, the Marguerite Long-Jacques Thibaud Competition in Paris (among the other prizewinners were Paul Badura-Skoda and Pierre Barbizet). He became a French citizen in 1969 and taught at the Conservatoire de Paris from 1970 to 1988, where his students included Akiko Ebi, Géry Moutier, Jean-Yves Thibaudet, Artur Pizarro, Nicholas Angelich, André Sayasov and Jean-Luc Kandyoti. Among his students were also Roberto Cominati, Andrea Padova, Filippo Faes, Francesco Libetta, Domenico Piccichè and Jean-Marc Savelli.