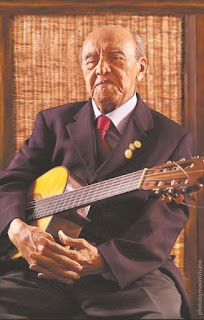 Alirio Díaz was one of the most prominent composer-guitarists of his country. A guitar competition named Concurso Internacional de Guitarra Alirio Díaz has been held in his honor in Caracas and other cities in Venezuela (the April 2006 contest was held in Carora). Many compositions have been dedicated to Díaz including Spanish composer Joaquín Rodrigo's Invocación y Danza.

In 1961, Spanish composer Joaquín Rodrigo's piece Invocación y Danza, dedicated to Alirio Díaz, won the First Prize at the Coupe International de Guitare awarded by the Office de Radiodiffusion-Télévision Française (ORTF). In turn, Díaz obliged and the next year performed this very difficult solo piece. It has also been recorded by Díaz. This was the first of many compositions subsequently dedicated to Alirio Díaz.

Alirio Díaz performed all over the world combining baroque music with the works of modern Latin American composers, such as Lauro, Sojo and Barrios Mangoré. He teached in Rome and performed in concert with his son Senio. During the European winter, he used to return to Venezuela to his native town, La Candelaria.