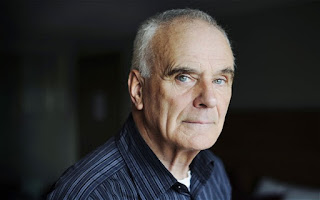 Sir Peter Maxwell Davies, the prolific English composer long known as an anti-establishment anti-monarchist avant-gardist enfant terrible — but whose work was so renowned that he was named Queen Elizabeth II’s official music master anyway — died on Monday 14 MAR 2015, at his home in the Orkney Islands of Scotland. He was 81.

As a student at both the University of Manchester and at the Royal Manchester College of Music, he formed a group dedicated to contemporary music, the New Music Manchester, with fellow students Harrison Birtwistle, Alexander Goehr, Elgar Howarth and John Ogdon.

His compositions include eight works for the stage, from the monodrama Eight Songs for a Mad King, which shocked the audience in 1969, to Kommilitonen!, first performed in 2011. He wrote ten symphonies, the first from 1973 to 1976, the tenth ("Alla ricerca di Borromini") in 2013.