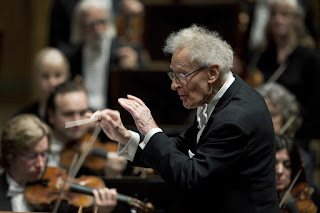 Stanisław Skrowaczewski (October 3, 1923 – February 21, 2017) was a Polish-American classical conductor and composer. Skrowaczewski was born in Lwów (then in Poland, now in Ukraine). As a child, he studied piano and violin; displaying talent on the piano at an early age, he made his public debut playing Beethoven's Piano Concerto No. 3 in C minor. A hand injury ended his piano career.

After World War II, Skrowaczewski graduated from the Academy of Music in Kraków (in the composition class of Roman Palester and conducting class of Walerian Bierdiajew) and soon, in 1946, became the music director of the Wrocław Philharmonic, then the Katowice Philharmonic, the Kraków Philharmonic and finally the Warsaw National Orchestra. He studied composition with Nadia Boulanger in Paris. In 1956 he won the Santa Cecilia Competition for Conductors.

At the invitation of George Szell, Skrowaczewski conducted the Cleveland Orchestra. In 1960 he was appointed music director of the Minneapolis Symphony Orchestra (later renamed the Minnesota Orchestra under his tenure in 1968), a position he held until 1979 when he became conductor laureate. In 1981 the American Composers Forum commissioned the Clarinet Concerto which Skrowaczewski wrote for Minnesota Orchestra principal clarinetist Joe Longo, who premiered it in 1981.WIKIPEDIA