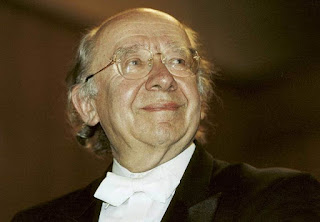 Conductor Gennady Rozhdestvensky was born in Moscow. His parents were the noted conductor and pedagogue Nikolai Anosov and soprano Natalya Rozhdestvenskaya. His given name was Gennady Nikolayevich Anosov, but he adopted his mother’s maiden name in its masculine form for his professional career so as to avoid the appearance of nepotism. His younger brother, the painter P.N. Anosov, retained their father's name.

He studied conducting with his father at the Moscow Conservatory and piano with Lev Oborin. Already known for having conducted Tchaikovsky's The Nutcracker ballet at the Bolshoi Theatre at the age of 20, he quickly established his reputation. He premiered many works of Soviet composers, including Edison Denisov's Le soleil des Incas (Sun of the Incas) (1964), as well as giving the Russian premiere of Benjamin Britten's A Midsummer Night's Dream and the Western premiere of Dmitri Shostakovich's Fourth Symphony at the 1962 Edinburgh Festival.

He became general artistic director of the Bolshoi Theatre in 2000, and in 2001 conducted the world premiere of the original version of Sergei Prokofiev's opera The Gambler.